Those of us who believe our future lies in collective cooperation rather than individualistic nationalism, and think the wellbeing and reform of the EU is the single most important political issue of our time, need to start thinking about the longer game.
It’s no more anti-democratic to fight against the referendum result than it is to continue to be a Labour supporter after the Conservatives win a general election, or vice-versa. We need to mobilise to fight for an open, inclusive, European Britain.
Effectively we are now in a two party system incapable of representing this view. Both are split down the middle: 58% of conservatives voted to leave, 42% to remain; and 37% of labour voted to leave, 63% to remain.
Neither can therefore stand at the next general election on a strongly pro-European integration ticket - whether at the time of such an election this means reversing a process underway, or starting a new process to rebuild something lost.
Britain needs a new political structure.
The Conservative and Labour parties must split along their European fault lines – pragmatic Labour MPs on the right joining with progressive Conservative MPs on the left to create a new centrist party – with economically sound, socially inclusive, and pro-European policies, either to join, or in coalition with, the Liberal Democrats – the only party committed to staying in the EU.
Were such a grouping to attract the votes of most of the 16 million who voted Remain it would win a landslide victory at the next general election. It took only 11.3 million Conservative votes to create a majority government in the last election, and the 17 million Leaver votes would likely split between the rump Labour and Conservative parties and the fringe extremists.
I hope our current MPs have the courage to reshape politics in this way.
I pledge my vote in the next general election to whichever party is pro-European.
Posted by Richard in London at 10:24 No comments:

Learning to love classical music (if you like pop music)

Two years ago a pair of clever, aesthetically sophisticated artists asked me to help them begin to like classical music.  It wasn’t so much that the desire was not there, but rather that with contemporary culture’s focus on the immediate and the new it’s easy to avoid exposure to classical music altogether, and therefore not quite know where to find the way in.

I asked for advice from various composers and music professionals – saying to them that the one thing I was not looking for was a chronological introduction – more important was music you could relate to if you knew all about pop music.  I was thinking in part back to how my love of classical music started, which was in about 1984 with Steve Reich’s “Music for 18 Musicians” – which seemed to me at the time to share much with the dub reggae I was then listening to – and from which I worked my way backwards over the years to Bach, only to find then great similarities between Bach and Reich in terms of compositional structures.

I've spent the last 15 years on my own journey, with great delight filling in the gaps for everything between the Baroque and the Contemporary, discovering the pleasures of Shostakovich one year, and Chopin the next.

This is the order of the music to which I introduced my artist friends to start them on their own journey:

I felt that once they had experienced the music above they would be pretty much ready for anything classical music can offer.  As they listen to music in their studio via Spotify, I could see what they were playing ... and I knew they arrived when one of them became addicted to Vivaldi's "Four Seasons".

If you are on a similar quest, happy listening!

Posted by Richard in London at 17:06 No comments:

Still basking in the memory of two concerts held on 15th and 16th April in London to premiere new RTF commissions by Hildur Guðnadóttir and Jóhann Jóhannsson, details of both of which are on the RTF website.

We had 70 people to a supper and recital at Sir Vernon Ellis's house on 15th, and about 250 people bought tickets for the concert the next day at Conway Hall.   Both pieces of music far exceeded my expectations, and I am looking forward very much to helping them receive further performances and evolution. More on this in due course, in the meantime here's some photos: 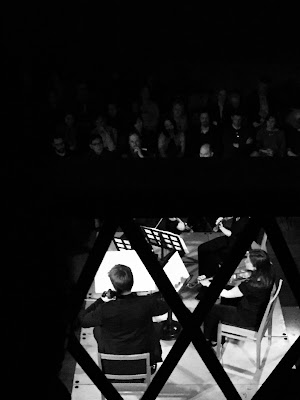 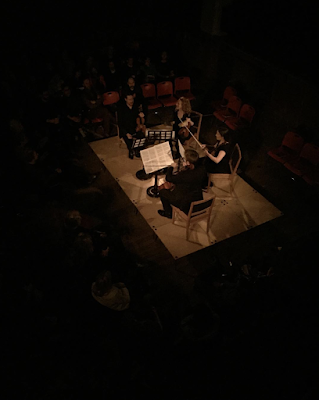 Posted by Richard in London at 19:02 No comments: