Apart from going to really quite a lot of bars and restaurants with various combinations of the delightful Pinar and Viola in rather a short space of time I did manage also to squeeze in a visit to the studio of what Dazed and Confused has described both as a "radical design duo" but also as "post-internet artists…whose work explores new totalitarian impluses and the decadence of global culture through what they call 'ecstatic surface design' ". I'd favour the artist description over the design one - a lot of their work is self originated rather than for clients; there's a solid philosophical grounding to their approach; and some serious aesthetically challenging work being produced as a result.

I'm very much looking forward to seeing what's in their future, but in the meantime here's a picture of their rather racy shoes.


I strongly recommend looking at their website and various social media manifestations. To the untutored eye it will all look a bit chaotic, but if you persist for a little bit you will realise you have become infected by some new ideas that might make you start seeing the world quite differently. Which is rather exciting given how rarely that happens.

I am obviously not the only person to notice this, as they are now guest blogging for the refreshed Dazed Digital.   Check out their blog on Turkey's anti-evolutionist showgirls.  Bizarre.

Posted by Richard in London at 23:39 No comments:

Overheard in the Rembrandthuis Museum, where I had dropped in to see once again the wonderful Rembrandt etchings:

" more of these stupid etchings….I thought there would be more paintings"

I also wanted a quick look at the various objects Rembrandt had collected to use for inspiration – something I have become interested in more since the publication of Érik Desmazières' recent book "A cabinet of rarities", and since visiting Thilo Heinzmann's studio in Berlin, overflowing with unusual objects very neatly arranged. Desmazières also created some etchings specifically for the Museum in 2004 - views of Amsterdam - here 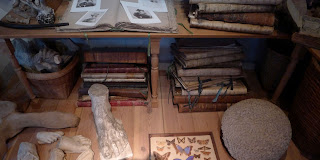 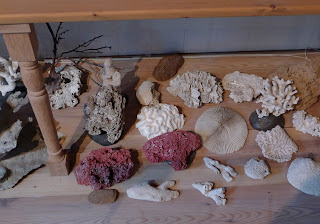 Posted by Richard in London at 13:32 No comments:

One of the more glorious venues in which I have been to concerts in the last few years is an Amsterdam church called De Duif.  It's on a beautiful canal - Prinzengracht - in the centre of the old city.  The Ives Ensemble are regular performers here, and last weekend I went to hear Morton Feldman's  "For John Cage" for piano and violin, written in 1982.

Played by John Snijders (piano) and Josje ter Haar (violin) the piece lasts for about 70 minutes.   It's quite hardcore modernism, and one would have thought anyone coming to it would know what they were letting themselves in for.  Quite surprising therefore that about 20 of the audience of 100 or so left during the first half an hour!  But the remaining 80 of us gave the performance a standing ovation at the end.


I've known John for a while - he's a great fan of Laurence Crane through whom I met him. The Ives Ensemble, which John founded,  last month played my 2011 Crane commission (Quintet for piano and strings) at a concert in Utrecht which was recorded for Dutch radio.  Public funding of the arts in the Netherlands is becoming more and more constrained, to the point where even groups like the Ives Ensemble - one of Europe's leading contemporary music performers - are really suffering, and likely to have to curtail their activities to a large extent.   The Dutch government has simply stopped a lot of its art funding, telling artists and musicians to find private sector support instead.  In a country with high tax rates this just isn't realistic.

It was fascinating therefore recently in London to meet the new Secretary of State for Culture, Maria Miller, who told me that in real terms funding for the Arts in the UK have only been cut by 1% over the course of the last 2 years.

There's two ways of looking at this:

Posted by Richard in London at 10:41 No comments:


The Stedelijk Museum in Amsterdam recently re-opened after a major refurbishment. It's all very nice, if a little bit predictable - white walls, wood floors, hanging walls and ceilings, translucent white blinds on sandblasted windows, contemporary minimal restaurant, lots of visitors wearing the mandatory black clothing, and so on. I thought a bit joyless, but to be fair one Dutch friend says its more fun when they have events there.

One day soon someone will open a landmark contemporary art museum that manages to escape from the orthodox aesthetic of monochrome minimalism. I look forward to that day!

All the usual suspects on display.  I thought that the post war art was mostly better than the pre war art - the Picasso, Renoir, Cezanne, Braque etc not the maybe best examples, but some very good and notable Yves Klein, Barnet Newman and others.

A piece that particularly caught my attention was this:


I'd not heard of Kenneth Price before - his hand trying to claw its way out of an egg was particularly engrossing.

Altogether a good place for a visit.  The website is here


Posted by Richard in London at 01:14 No comments:

At the Warwick Arts Centre

A quick trip out of London in order to see Jóhann Jóhannsson and Hildur Gudnadóttir's' new composition for Opera North - "Pandora's Box".   This was a live performance by 4 musicians including Jóhann and Hildur in order to illustrate the 1928 silent movie of the same name, starring the siren of silent movies, Louise Brooks.

The composition beautifully complemented the film - for the most part the music wasn't attempting to illustrate the narrative, but to enhance it.  I particularly enjoyed a sequence of about 20 minutes in the first half of the film set in the backstage of a revue - wonderful choreography of the movement of the actors, and very expressive music to accompany it.  Links here:


While at the Warwick Arts Centre I also dropped in at the Mead Gallery to see an installation by Aeneas Wilder - "Untitled No.162".   This was a rather fascinating, huge sculpture built out of what must be tens of thousands of bits of wood, all resting on each other (i.e. no glue, no nails etc).  I asked one of the gallery attendants if it made them a bit worried when people went too close to the sculpture, and she said that guarding the piece was the most nervous making job she'd ever had!


Here's a panoramic view of the piece with nervous attendant seated on far right:

The piece is being removed by the artist on 1st December at 4pm - in an event described as "kick-down" - because that's literally what he is going to do.
Posted by Richard in London at 00:29 No comments:

Not really art or music, but I couldn't resist writing about a recent event at which my friend Alice launched a large ship on the Thames.  Technically I think this makes her the ship's "godmother".  She's godmother to my son too.  I wonder if that makes him related to a ship?

On a rather grey day the ship's bunting really stood out.  Rather incongrously hanging from the side of the ship was a ball of flowers, with a bottle of champagne suspended underneath it.


Reverend Warren led a prayer; and then Alice blessed the ship by doing something (perhaps a radio control button) that let the champagne bottle swing free and hit the side of the ship.  It broke on the first attempt.

MS Adeline then sailed out under Tower Bridge and down the Thames to the sea.

We got as far as the Thames barrier in our pursuing boat, at which point we left her to continue the journey without us.   Bon Voyage, MS Adeline!

Posted by Richard in London at 18:03 No comments:

A couple of weeks on and I have just about put the 7 day party that is Frieze far enough behind me to start being able to focus my eyes and order my thoughts.

Much is written of Frieze proper, and I shan't add to that except to say (a) it was fun to bump into lots of friends and (b) I liked Cabinet's stand best.  It didn't have anything you could buy - more a conceptual pointer to work by John Knight somewhere else, which you also could not buy. Quite brave, and definitely apart from the crowd.

I loved Frieze Masters, of which the director Victoria Siddall was clearly very much completely in control.  I bumped into her on the third day of Frieze wandering around radiating a mixture of relief and satisfaction, I would say with perfect justification.  I'd gone there worried that the galleries would take literally the definition of "Masters" as more than 10 years old, and it would be full of tentative Damian Hirst pieces trying to circumvent the editing process of history.  But no, it was one of the best looking art fairs I have seen for a long time full of genuine modern, and ancient, masterpieces, all very enhanced by the relaxed grey and beige theme and the carpeting underfoot.  The galleries I talked to had sold quite a few pieces, and thought they would definitely return in future years.

The juxtaposition of the very old and the almost new was lovely, and presumably a more accurate representation of what most collectors’ houses actually look like than the synchronic displays at Frieze.  Some of the old was very tempting, I’ve always wanted an altarpiece:

Some very pretty and friendly girls in the Helly Nahmad stand wanted to sell me a $20m Calder mobile. I liked it, particularly the way it was rotating, but not $20m worth!

As with Frieze, it’s quite fun to wander round and see what all the galleries that are showing have in common.   Everyone seemed to have decided that Donald Judd was a safe bet – at least 5 of the galleries were showing Judd sculptures.  It’s either collusion or Zeitgeist.  But they do look very good next to the old masters.

Amazing to think one could buy this Yves Klein.  I wish…

I was quite taken by the fact you could buy a gargoyle from a cathedral; an Indian miniature from the 16th century;  a 2nd century BC Han dynasty pot; or a Picasso.  This one was rather remarkable, with very thick textured paint:

Finally, and one of the more modern things there, I did very much like James Rosenquit’s Trash Can, all of 36 years old:


Posted by Richard in London at 00:28 No comments: