Gaugin at the Tate Modern

Gauguin.  Not my favourite artist.  I think it's the vague recollection of posters of semi-dressed women pinned up on the walls of my boy's boarding school making liking Gauguin seem somehow a bit adolescent.

I always thought that going to Tahiti had made him paint like that. All those colours.  However, the Tate exhibition shows something else, which is that he was a painter of unique and driven vision.   It turns out he always had painted a bit like that.  My favourite picture in the exhibition was one he did of his daughter asleep, at a point where his life was still eurocentric.

To quote the Guide Michelin: "worth a visit, but not a detour".
Posted by Richard in London at 18:31 No comments:

To the Soutbank in the evening for the (almost) premiere of a new concerto by James MacMillan written for his friend, Nicholas Daniel the oboist.
One of the main strands of contemporary classical music is the formal minimalism of composers like Reich and Cage.  My friend is part of that tradition, and would point to eg: the sculptures of Donald Judd or the paintings of the abstract expressionists as his inspirations.   The other significant strand, to which MacMillan belongs, is a more flowery and colourful world, the extreme edge of which tends towards cacaphonic discordance.  Think Harrison Birtwhistle.
Anyway, the MacMillan oboe concerto was a surprisingly rich and lovely piece of music.   Full of colour.  MacMillan is very religious, and the first time I think we’d come across his music was in Winchester about 15 years ago when we stumbled on a violinist and a pianist rehearsing a haunting, sparse, John Taverner like piece in an otherwise empty cathedral.
MacMillan conducted the concert with vigour, and well deserved the favourable response from the audience.
I met both MacMillan and Nicholas Daniel at a drinks party after the concert.   Nicholas was full of excitement about the piece, and explained that it had been incredibly difficult to learn as it was written as a palindrome.   Literally.  The notes for the oboe part in the third movement were precisely the same as those of the first movement, but reversed in sequence.    One really could not have told from listening to it, but it made me slightly revise my allocating MacMillan to the flowery end of contemporary music – it’s a very abstractly formal proposition he’s set out in the score.
As a footnote, the final piece in the concert was Shostakovich’s chamber symphony No 1 Op 110a, which is in fact a rearrangement by Rudolf Barshai of the String Quartet No.8 in C minor Op.110, a piece which will be in a concert I hope to sponsor next year.   More on that in due course.....
Posted by Richard in London at 11:02 No comments:

Trisha Brown reformed her dance company about a year ago, and her dancers were performing some of her early works from the 1970s over the weekend at the Tate. Loved the first piece – it involved 4 women going through a preprogrammed series of movements, and 4 men rather nonchalantly occasionally moving them into different orientations or positions - such as standing, lying down, leaning against the wall and so on. The piece was 20 minutes long, and there was a droll moment near the end where 2 of the women had been positioned lying on the floor in a way that meant their preprogrammed movements brought their lips into contact with each other. The dancers did very well to restrain their mirth.


My impression of the dance was that it was partly about the power of men over women, a view particularly heightened by the casualness with which the men were moving the women around, and the apparent passive submission of the women to this. I talked to one of the company after the performance, who was surprised by this observation – she thought it was much more about the deterministic power of movement to overcome the capricious intervention of men. 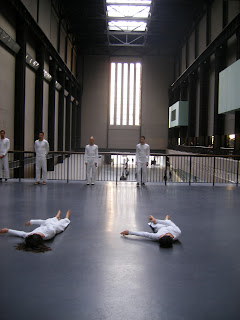 In general the Tate Modern seems to be getting better and better at curating dance pieces, and the turbine hall and galleries make a great location.

Posted by Richard in London at 10:13 No comments:

Diaghilev and the Golden Age of the Ballets Russes (V&A)

I was fortunate to be given a tour of the Diaghilev exhibition at the V&A last week by the curator, Jane Pritchard.   It's a very full exhibition, and if you go it deserves a trip of at least 2 hours. Link here: V&A

What struck me most were the extraordinary set and costume designs by artists such as Matisse, Picasso, Rouault, and in particular de Chirico.
It started me thinking about whether designs for dances now have similarly drawn on the leading visual artists. There's examples such as Julian Opie and the Royal Ballet, and Anthony Gormley's work with Sidi Larbi Cherkaoui at Sadler's Wells.  I'd like to see some more abstract artists interact with costume design!
Posted by Richard in London at 14:15 No comments:

I've known Peter well for 25 years.  I'd helped him set up his first art exhibition in Lyons in 1986 with our friend the photographer Trevor Key.

The pieces Anna and Peter have made are fascinating, both as objects in themselves but also as a performance piece appealing to those voyeuristic tendancies.  Watching the Reims art crowd tying themselves up in a piece made from mirrors and bondage straps, or sitting in the observation booth like purple space, I realised that the art wasn't the pieces so much as watching people interact with the pieces.

Excellent dinner afterwards, followed by a party. Met some very interesting people include Tom Burr, the American sculptor, who is going to be the subject of the next exhibition at frac (and also made what was I think one of the best pieces I have just seen at Frieze, shown by galerie neu).
Posted by Richard in London at 23:48 No comments:

I was lucky enough to be invited to the preview of MOVE: Choreographing You at the Hayward Gallery earlier this week http://move.southbankcentre.co.uk/.  It's a fascinating attempt to do something conceptually difficult, which is to curate contemporary dance works in an art gallery.   I ended up thinking that:
Posted by Richard in London at 18:23 No comments: